So, what in the world do Pineapples have to do with Diablo III? Well, quite a bit more than you think.  Here is some information I’m sure you haven’t heard before (a must know for any great trivia players, or just being “that guy” who always seems to know everything). When Blizzard launched Diablo III, the game stopped short of coming to China, as China requires all imported games to be cleared by the government’s Ministry of Culture before they can be sold. However, this review can take months (as was the case with one of Blizzard’s previous titles, Starcraft 2, which received approval by the ministry a whopping six months after its initial launch).  Sellers needed a plan, and fast.

Nothing here but pineapples…. (first listing seen with translator)

Site moderators tasked with enforcing the rules began searching on The Chinese e-commerce site, Taobao Marketplace, for the banned Diablo III game.  They searched with the full Chinese name of Diablo III — which translates as “God of Dark Destruction” — and it turned up with no results. But vendors were selling CD keys to the Taiwanese version of the game, calling their product “Big Pineapple III”, which in Chinese is pronounced as ‘Da-Bo-Luo’ (which sounds like the game’s English name). To even further avoid censors, the vendors uploaded pictures of pineapples to advertise their product. Victory to all Chinese gamers! Unfortunately, after someone decided to spill the beans about how easily and cleverly sellers were getting it over on the Chinese government, the scandal was put to an end. And, alas, it seems Diablo III still isn’t available in China!

So, what do we do when we learn something new?  We make cake!  These are delicious cakes, sure to come with a story that few have heard before. I prefer to make these cakes in a particular Mini-Pineapple Cake Pan, but you could use a large muffin tin if you don’t have one (but I would highly suggest buying the special pan!). 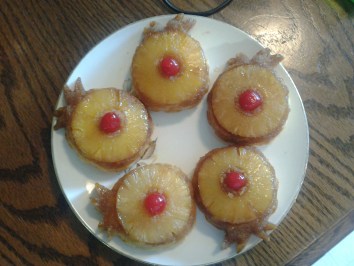 September 30, 2013
Baking No comments Megan Murray
← World of Warcraft: The Sharks Interview with the Leader of the Pokemon League at Cornell →