The Sims 3 is a great game for making a nice little family in a house with a white picket fence, a dog, and 2.5 children.  However, that gets old after a while (and there are only so many ways torture and kill off your sims before that becomes boring).  What a lot of people don’t seem to know is that the Sims is great for ghost families!  Ghost Sims can walk (float, really) right through walls, they can scare other sims, and they appear in translucent, shiny colors (oooh!).  So you want your own sim ghost family, right? 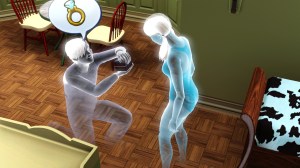 First, you need to find a ghost.  Ghosts come out of gravestones at night, and you can interact with the ghosts for only a short window of time at night.  So, you need a gravestone!  You can attain a gravestone in one of two ways: have a sim with the “kleptomaniac” trait steal a gravestone from a graveyard, or have a family member die, producing a gravestone.  When stealing a gravestone, it is important to note the little symbol seen on the grave – it is a symbol of how the sim died, and what color the ghost will be.

So if you want a ghost of every color, it’s probably easier to kill a sim in each way, rather than hunting through graveyards and hoping your sim picks up one of each (because you gotta catch ‘em all, right?).  All ways of killing your sim is pretty self explanatory, but I had a little trouble with electrocution, so here is the easy way to kill your sim with electricity: 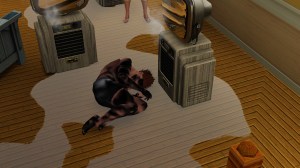 Now you have a ghost to work with!  Now you need a female, human sim to befriend the ghost and woohoo for a baby.  This may take a little bit, as the ghost is only available for a few hours during the night, and may vanish at the worst of times. 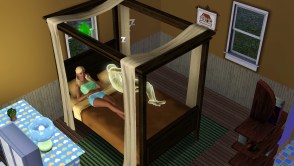 Getting ready to make ghost sims…. 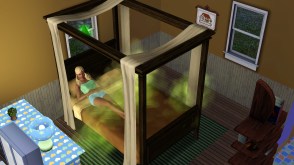 Ghost sim + Ghost sim has 100% chance of a ghost baby, with a 50% chance of having the color of a parent particular parent.

But pretty soon you will have yourself a baby ghost, and then it’s only a matter of time before you collect some of each color!  The one bad thing I did notice about my ghost sims, is that even though a sim is a ghost themselves, they will still get the “Spooked! Saw a ghost!” negative mood debuff when seeing another ghost.  In this case, it happens when seeing other members of the family! 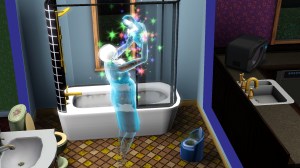 And lastly, don’t forget to expand your family with ghost pets! So that’s how to make your very own ghost family!  What out of the norm things have you been up to on the sims lately?

September 22, 2013
Offline PC Video Games 1 comment Megan Murray
← The Cake is Not a Lie! World of Warcraft: The Sharks →