With the quickly-approaching release of Pokemon X and Y, I’d like to share with you a bunch of things about the Pokemon handheld games; stuff I wish I knew before I played through entire games. 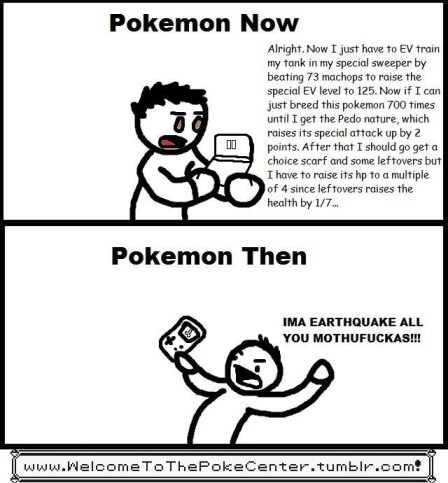 I’d like to start out with some high level meta game: Pokemon tiers.  Even if you’re not into intense multiplayer online battles with others, it’s still cool to see which pokemon are labeled as the best, and why.  Check out the site I’ve linked to each tier name, there is some useful information about every particular Pokemon.

Other things I really wished I knew before I ran through my Pokemon games: Natures. Each “Nature” increases a stat by 10%, and decreases a different stat by 10%. This can be extremely crucial, as a pokemon with a decrease in a main stat will really be useless. If you have Modest Gyarados, you’re gonna have a bad time. Some Natures do nothing, neither increasing or decreasing. While this won’t benefit you, it’s better than have a nature that hinders your pokemon.

October 6, 2013
Nintendo DS No comments Megan Murray
← Interview with the Leader of the Pokemon League at Cornell The Worst Pokemon in Existence →