Everyone talks about who the best pokemon are – but what about the worst?  These poor saps never get any attention.  And how will you know which Pokemon you need to desperately avoid?

In no particular order, we introduce to you the suckiest, the crappiest, the whole heartedly shittiest Pokemon in the entire game (pre-gen 6).  Don’t use them. Ever.  All descriptions of the lovely, crappy pokemon are from Smogen.  Click the Pokemon’s name to be taken to the site.

There is no excuse for using Magikarp, at all. All comedy value in using it disappeared by about 1998, and anyone who finds it funny deserves to be fed Rare Candy until they get diarrhea.

With the nerf of Explosion and Selfdestruct in Gen 5, Magikarp lost out in its main use as a sacrifice to switch in when the opponent goes boom. However, it still hits a respectable 426 with Jolly and Choice Scarf attached, so you might be able to revenge kill a low-health Dragonite or something. Putting Sandstorm up would do exactly the same thing for all the damage you’re dishing out, but let’s work with what we have here.

We’ll take a generic Water-type, give it crummy stats EVERYWHERE except for Speed, give him a trait that doubles his Speed in the rain and the option to use Agility and call it a day. Luvdisc is great if you’re playing with Battle Timeout, because its mere presence should cause your opponent to laugh at it for so long that you win the match.

Watch Luvdisc stall out his opponents with his amazing total of defenses not even topping 170. Confusion and attraction together equals a 75% chance your opponent has to wait one more turn before Luvdisc is turned into a pile of heart juice, Protect is another turn, which means that Toxic might inflict a little damage in the meantime. If you’re lucky.

Charm turns Luvdisc into a very sturdy physical wall that can survive two Caterpie Tackles and force it to switch out.

I am of the opinion that as Pokemon Red and Blue were about to be released, Farfetch’d accidentally spilled some ink on the suit of one of the most important Game Freak staff members. Since then, they have hated Farfetch’d and did everything they could to make this thing suck as much as possible on the battlefield. No Base Stat over 65, a gazillion better Normal/Flying-types, some interesting moves (none of which can be employed to their full potential) and limited ways of obtaining it ever since the beginning of the Pokemon games. The best thing that can be said about Farfetch’d is that it got a personal item (Stick) which makes it get random critical hits. When you don’t need them, usually.

Behold! ‘Tis Sunkern, the Grass-type dynamo. Be frozen in amazement at its 180 base stat total, which technically “outclasses” all other Pokemon. Be possessed by admiration at its movepool, which contains a gargantuan ten viable moves. Be overcome with awe at its abilities, which make it a veritable powerhouse under sunshine. Seriously though, Sunkern’s terrible. Don’t use it.

Life Orb is the preferred item to add an extra kick to Sunkern’s attacks in exchange for its health, but that’s okay, Sunkern isn’t one to stick around, it dies on the battlefield like a true fighter. 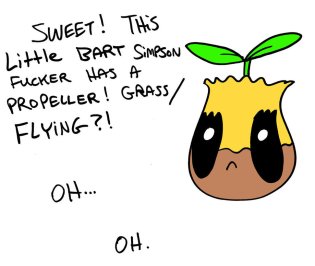 3 thoughts on “The Worst Pokemon in Existence”