I recently had the opportunity to play a bit of GTA V, the Xbox version, at my boyfriend’s house.  I’ve heard people say it was fun, very addictive, and extremely violent – boy were they right!  However, you may have noticed that I still put this game in the PC category: because it will be PC soon, and I can’t wait to get it.  I don’t have an Xbox or a PS3, and I’m a rather die-hard PC gamer.  Games are just better on PC.

I confess, I have never played any of the previous GTA games.  Off the top of my head, I really can’t explain why.  Thinking about it now, I can probably blame some sort of male centered marketing – box art with sweet cars and girls in bikinis just isn’t a game I’d pick up.  Not saying I wouldn’t or don’t like the game, because after playing GTA V it’s obviously really amazing.  It just goes to show that a lot of game companies are probably missing out on a huge (okay, average-sized) female market. And GTA isn’t the only one at fault here; I never would have gotten into The Elder Scrolls if Morrowind hadn’t been a free gift with a new PC I custom-built way back when.  And boy is Morrowind the best game ever!

But back to GTA V – My boyfriend handed me the controller and told me I could just drive around for starters.  I wanted to drive somewhere useful, so he suggested the clothing store.  Wow, you can dress up your characters in cool clothes?  That’s awesome!  I quickly realized that his character’s wardrobe was very low on pink, so I helped him out.  After character customization, I wanted to change the car around too.  I made his car one of my favorite colors, which I think went rather nicely with his new pink top. 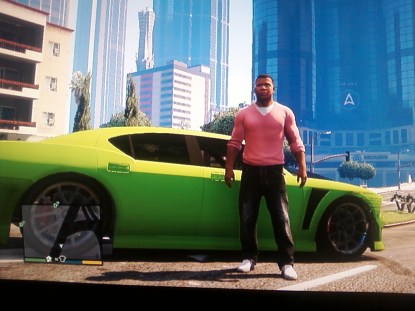 If you let your girlfriend play your GTA, your character will get the obligatory pink shirt

But after getting the car done so nicely, I really didn’t want to scratch it up.  And I really liked driving this specific car, so I didn’t want to flip it and lose it.  The super realistic feel of the world and roadways also just made me inclined to follow traffic laws.  It became pretty obvious that my boyfriend found my driving humorous, and almost frustrating. “Few, that was close,” I’d tell him after slamming on the breaks from the cars in front of me stopping at a red light.

But soon enough I got tired of driving around slowly too, and was racing around flipping cars, stealing cars, killing pedestrians, and accidentally killing myself.  This is where it really hit me, that this game is absurdly violent.  Like damn.  You can just kill people recklessly, with your car, your fists, or a gun.

The end of the beach showed a very shiny pier, which of course peaked my interest.  I must go there!  So I drove down to the amusement park, and was excited that you could ride on the Ferris Wheel and the roller coaster! 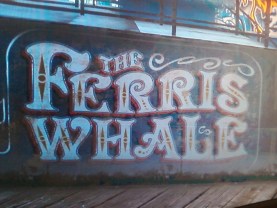 The graphics in the game are really great, and I enjoyed the sparkly lights of the pier.  While on the Ferris Wheel the game zoomed out, letting you admire the landscape.  I’m glad it happened to be night, so the Ferris wheel was all lit up.  This game isn’t all violence and hookers! 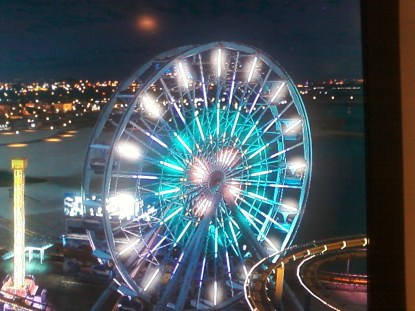 I also flagged down a hooker by slowing down and honking at them.  You can then proceed to, well… pay the hooker for her services.  When that was finished, the hooker just gets back out of your car and continues walking down the street.  My boyfriend reaches for the controller and says, “Here, watch this.”  He then draws his gun and kills the hooker, grabbing the money back from her dead body (which was not actually the same amount of money I paid her; damn inconsistencies!) This almost made me a bit upset, and I asked him how many hookers he killed like that.  He responded “Hm… How many have I gotten with?  All of them. No one gets out alive.”  Some games I think you can be a little lenient on the ratings, but not this one.  It’s R, and it needs to be R.

What were your latest shenanigans in GTA V?