Wait a minute, isn’t it supposed to be “Mid or feed?”  or maybe “adc or feed”?  Surely no one actually claims “Support or Feed.”  Once, it happened to me.  Ranked draft queue, and second pick says all they play is support.  That’s it, and nothing else.

But I guess I can’t be that upset; usually people are very happy to get anyone who voluntarily chooses to play support.  I myself am a support main (but it’s not like I’m unable to play any other position).  I didn’t become a support main until I started playing a lot of ranked in duo queue with a friend who was a much higher rank than me, meaning I was always last pick.  This forced me into a support role so often that I just learned to love it.  Often times I do feel like just playing support, and feel like saying “Support or Feed!”  But honestly, I’ve pretty much never gotten into a fight over who plays support.

And really, why not play support?  When there is a role that is clearly underplayed, it makes sense to go for that role.  This is similar to my mentality playing WoW, where I would never role a simple dps class.  My favorite there was to play a healer, so I guess that makes even more sense that I grew to love the support role.

In this post I’ll tell you about my two favorite supports!  But let me tell you - it’s not as easy as it looks. 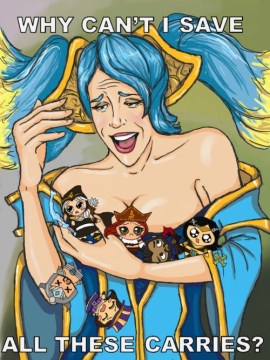 Sona was the first support I picked up, being that she came out right around the time I started playing.  To me she looked really pretty, and I was heavily favoring ranged champions.  At the time I didn’t really understand all of the lane roles, but that worked itself out eventually.

And as it turned out, Sona is definitely one of, if not THE, easiest champion in the game. It was great for me to start with her.  I would recommend her for anyone who is learning to play support, as you can focus on other things besides playing your champ.  For example, Sona makes it easy to learn ward placements, the harrass flow of early game, and when to use all your nifty support items.  Her heals also let you get a bit sloppy with your supporting, allowing you to heal your carry.

I’ve had some really great games with Sona, and while I do prefer my main support, Nami, Sona has her place when you need it.  For example, if I ever play ranked at school, I’m always playing Sona: the internet is laggy and I often play on my trackpad, so the 3 auto target skills still allow me to play just fine. 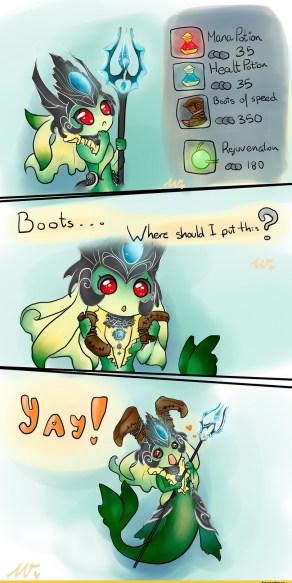 Never was sure how those boots worked.

Nami is my favorite support.  Her stun is crazy long and her heal wave is insane if you get all 3 bounces.  However, she does take a lot more skill than Sona (which isn’t saying much) and you certainly can’t play her (effectively) with a trackpad or a laggy internet connection.  Also, did I mention she’s a mermaid?  That’s pretty much enough right there. She also really does well with a skilled adc, and vice versa.  Her bubble stun means time to follow up for the adc, and if they don’t it’s such a wasted opportunity.  If I know my adc isn’t all that great, I may not pick Nami.

Another support that really trumps both of these is Thresh.  However, he is almost always banned in ranked games, so I currently have no desire to learn to play him.