Why would they do this to us?!  D:  I feel like I have been waiting forever for this game, and I have never felt so let down.  I played through Morrowind, Oblivion, and Skyrim all as a female Argonian, and now I can’t even bring myself to play one in The Elder Scrolls Online.

I know this game is still in beta, but with the release date set to 4/4/14, there is no way they are fixing these terrible game modules now.

A quick comparison for you of the female Argonians: 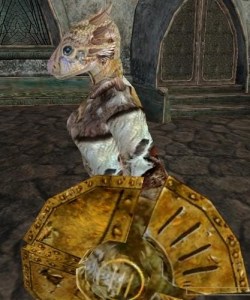 An Argonian Female from Morrowind. 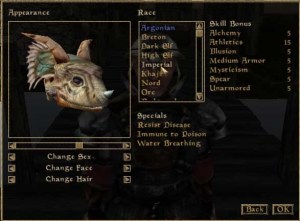 Character Creation.  This one is a male.

These Argonians are actually cute, while still maintaining an extremely reptilian figure – Can you believe it?  These are my favorite character models.  In Morrowind, males and females had differently structured faces – males were more “snouty,” and their options for detail included larger horns or “ears.”  The females had more feminine decoration, small horns or light jewelry.  The females had no breasts or other “human” ways of determining sex, so the face was detailed and easily showed sex.  They have the mouth running all the way through the face, but it is set very low and looks great.

And here they are in The Elder Scrolls IV, Oblivion. 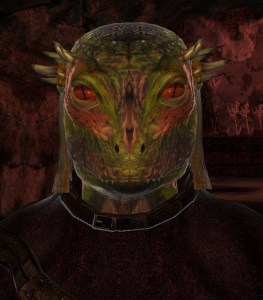 Ocheeva, a popular Argonian in the Dark Brotherhood. 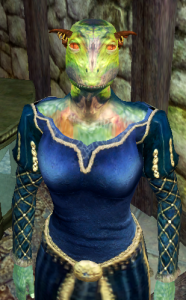 Very green in color, and even with the addition of boobies, still very cool and reptilian.

Here they changed to be more human – with boobies, hands with appendages more like fingers than claws, and “normal” feet with toes that allow them to wear boots.  Their long mouth is still set very low.  Sometimes teeth hang out of the mouths, which I think is cute.  They came in a huge variety of colors, often very bright.

And in The Elder Scrolls V, Skyrim, we see them getting more lizard like.  They begin to encroach on ugly, but it’s bearable.

My character in Skyrim. I feel like a fierce lizard!

Side view. The mouth is large and runs all the way through my head, but they manage to pull it off. This is actually my second favorite model, my favorite is still the adorable Morrowind model.

These Argonians have a nice arch and snout on the face, perhaps even better than Oblivion.  They look less cartoony and more reptilian.  They definitely feel rougher, dirtier, and overall less feminine – but I still liked it, and played plenty of hours of the game.

However, this trend continues with The Elder Scrolls Online, and they’re finally taken it too far. The name is well deserved for the character model.

Ugly. All I can say.

All femininity feels gone, except for having boobs.  I also can’t create one that doesn’t feel like an old lady.  They come even closer to a human with their overall character model, the face overall looking rounder.  Their snouts look more like a stupid beak.  I made one and could barely make it through the opening scenes before I just had to make a different character.  It’s gross, upsetting, and just makes me really sad.

But don’t let this stop you from buying ESO – I am just going to have to suck it up and play a different race. Maybe actually be a human, as the Khajit are almost equally disappointing.  I want to stay away from doing reviews on my blog, but after playing the beta I highly recommend ESO!  I also really recommend pre-ordering the game: