While the cards claimed they “expired in 5 days,” rumor has it that they don’t expire until the 25th!  But also, rumor has it that a Riot employee tweeted that the codes expire on the 27th, but I was unable to actually find said tweet.  But at the very least, I have confirmation they are working as of today! 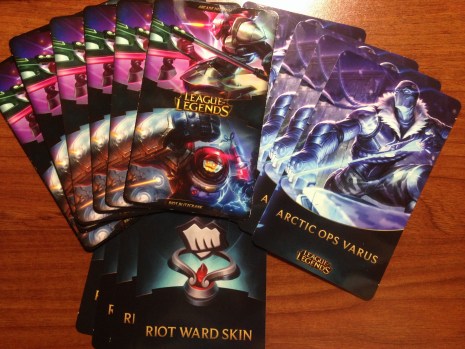 I got quite a few codes from PAX East!

I also just learned that the free codes from PAX East can be used once per server.  This means I have some extra codes to give out – but most of them were already used on NA (my server).  Visit me on Facebook where I will be posting skin codes that work on various servers!  Also, if you have any extra codes, feel free to post them in the comments for others to pick up.  No need for these to go to waste!

As of right now I only found a few Arcade Hecarim and Riot Blitzcrank Skins, but I might be able to find some Artic Ops Varus skins – maybe even a Riot Ward skin – as well!