The game doesn’t come out until March 2018, unless you backed it on Kickstarter. Disclaimer: I am not affiliated with TurtleTee in any way, but I love unicorns and I’m a huge TeeTurtle fan. So you can take this review with a grain of salt. However, I’m also a huge fan of kittens and The Oatmeal, so never mind, take this without salt!

Unstable Unicorns gets a 5/5 from me:

Exploding Kittens only gets a 3/5:

Even after buying the NSFW expansion, I can’t see myself having fun playing Exploding Kittens more than say, 5 or 6 times. I still bring it out to play at parties with people who have never played before, but it just gets old fast.

We all know Exploding Kittens is on point for their art – but how does Unstable Unicorns compare?

This is Unstable Unicorn’s main draw: All of the art is both adorable and hilarious. I’ve always loved TeeTurtle’s art style; it’s one of the reasons they’re so successful selling T-shirts. What other reason do you buy T-shirts for besides the look? Unstable Unicorns embodies this with their adorable art that draws you in and makes you want to play. 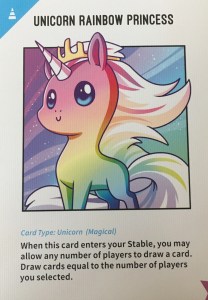 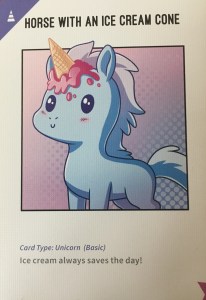 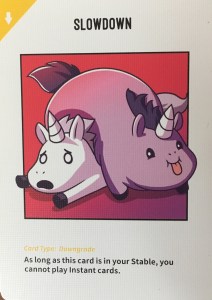 Besides drawing you in to take a look, I think the adorable art actually helps with gameplay! For example, there is a card that zaps your whole stable of unicorns into Baby Unicorns. This is really detrimental as all of your unicorns lose their abilities. And yet, when I’m staring at an adorable stable full of baby unicorns, how can I be mad? 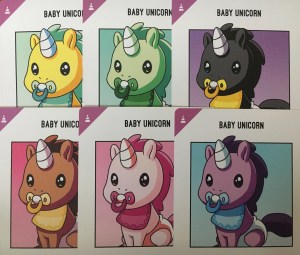 Unstable Unicorns almost reminds me of MTG or Pokemon, where I find myself wanting to use the prettiest or cutest unicorn, even if it doesn’t have the best ability. I’m never evolving my Dragonair, and I love my MLP-sleeved MTG deck made of entirely horses, unicorns, and Pegasus. Unstable Unicorns does have cards that strictly outclass others, but you can definitely tailor your field to use the unicorns you want.

The art isn’t just hilarious to look at, the stunts they pull in-game are hilarious. 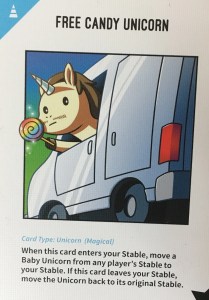 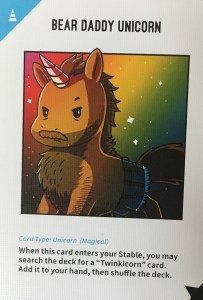 Both of these cards are from the NSFW expansion. I think their hilarity speaks for themselves. They’ve also lead to phrases such as, “I would have bombed Megan’s Unicorn, but I already took her baby.” 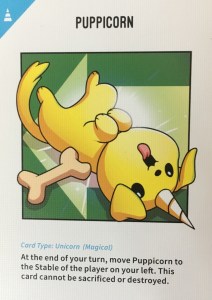 Puppicorn, from the base game, is great for so many reasons. He’s a puppy, and he just wants to love everyone! I really want to see how strategy would change once he is on the field, but his not-so immediately beneficial skill means I’ve yet to see anyone play him. However, he has a very interesting tactic when played against someone with a tiny stable…

“A strategic card game that will destroy your friendships…”

also known as “The Mario Party Effect,” I actually don’t think this game will do that. Unicorn Rainbow Princess, from the Rainbow Sprinkles expansion (pictured in the first section), also shows an ability like this. There is also a card that makes everyone’s stable upgrades available for everyone to use.

This is absolutely necessary in a silly game you want to play with friends. You want to start playing and laughing at the adorable cards without getting bogged down in rules.

The win condition is simple: Get 7 unicorns on your field. With that information alone, you can probably get away with just reading the cards you draw and referencing your Rule Card.

I love Rule Cards. You give your party a quick run-down of the rules, and everyone can look up specifics quickly on their own card without disrupting gameplay.

This is one of the most important factors for me in any tabletop or video game, and where I think Exploding Kittens starts to fail. Unstable Unicorns is more than a few cheap laughs. My favorite combos so far are: 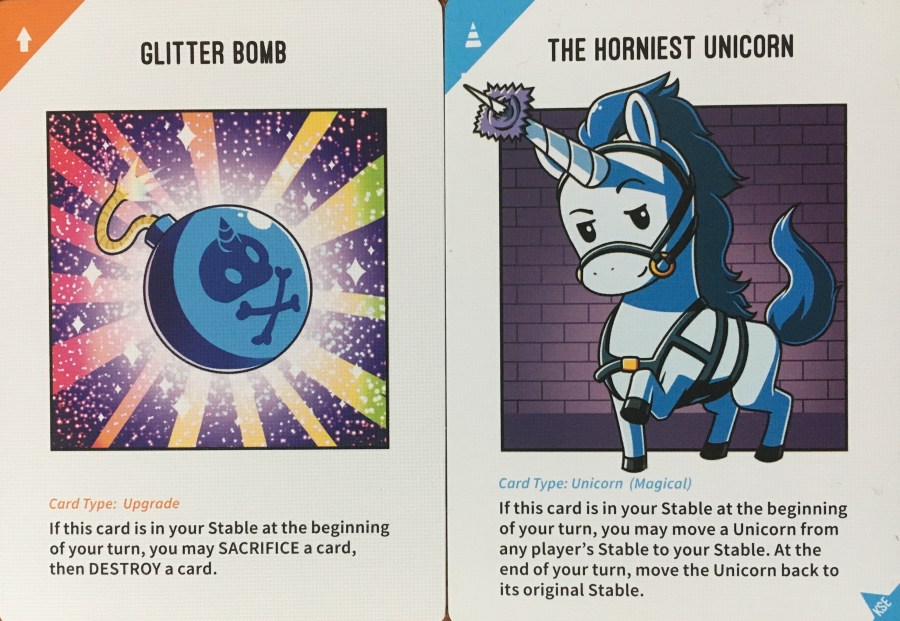 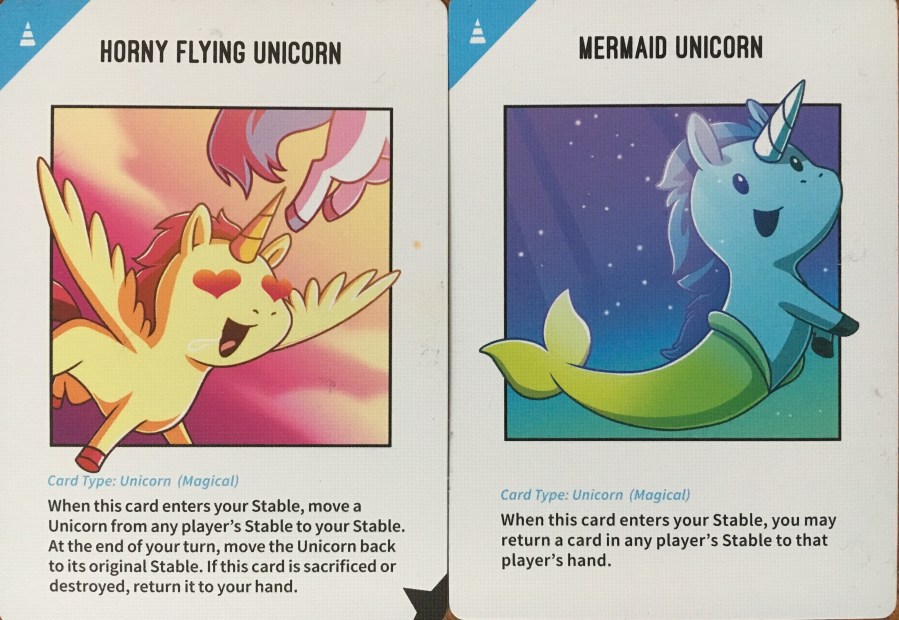 This involves some rule-deciding on the players part.

As you can see from the pictures, these two cards also show some physical damage. We had a party-foul and spilled a drink all over them. I think it actually shows the quality of the cards are quite good, considering the drink spill!

“The quality or fact of being suitable for or worth playing more than once.” – Oxford Dictionary

I could play this game over and over. In an average game with 4 people, you do not go through all the cards – some are never drawn, some sit in someone’s hand and are never played, some are discarded, etc. It would probably take a good five plays with a 4-player group to see all of the cards. Add some expansions, and this skyrockets.

Even knowing all of the cards available to me, I still want to replay this game to use my cards in different ways! The game leaves you feeling “If only I had played my spell instead of my unicorn!” rather than Exploding Kittens, which leaves you feeling “eh, there was nothing I could do.”

This game has a ridiculous amount of cards that make you shuffle the deck. Running two expansion packs, it’s impossible to bridge the whole deck, even with 4 players holding cards in their hands and cards on the field.

Shuffling is time-consuming and slows down what can already be a very long wait time between turns. I found myself choosing not to play a card which shuffles the whole deck, even though it was without a doubt the best option for my turn.

2. Only two expansions fit in the box

I have the NSFW (52 cards) and Rainbow Sprinkles (27 cards) expansions, and my box is full. I honestly don’t know what I’m going to do when I buy the other expansions. Maybe take out the rule cards, or the optional drinking rule cards from the NSFW expansion sets? This is the exclusive Kickstarter box; maybe the regular white box is larger?

However, based on the shuffling struggles I already listed, maybe the game is not meant to be played with more than one box-full of cards? 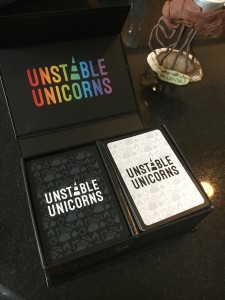 It seems a large part of the balance is ganging up on the player currently in the lead. This works extremely well, except when there are only two players. Nobody can save you. 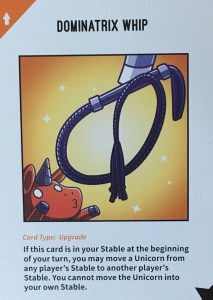 This obviously has no place in a two-player game because there is only one opponent stable. I think TurtleTee needs to give their expansions a closer look for the two-player game mode.

UPDATE September 2018: The 2-player rules now explicitly specify to remove “Autoerotic Asphyxiation” from the two player game. This is the milling card! I’m glad to see Unstable Unicorns identified this as an over-powered and unfun strategy for 2-player games.

Below is my original critique calling out the milling strategy. This critique no longer applies because the card is not legal for a 2-player game, but I’m leaving it for reference.

The most effective strategy in a two-player game is milling (removing cards from your opponents hand). As soon as your opponent is down to only one card per turn, the game is basically over. While it seems as though this would be hard to do, I played four 2-player games and each time the game was eventually won through milling.

Besides how ridiculously effective it is, if you’ve ever played against a milling deck, you know that not only do you lose, you hate yourself the whole time and it’s no fun at all. This is similar to the feeling you get when losing against a toxic stall team in Pokemon.